For many reasons, the former president of the United States was quite controversial. He was a strong Twitter user and he tweeted almost every day. However, in the runoff to the U.S. presidential election a few years ago, things got really heated up. Former US President Donald Trump’s Twitter account was eventually suspended. For about two years, he has been out of Twitter. At the time, Twitter executives claims his account was banned because it was used to incite violence. Now the new Twitter boss Elon Musk has started a survey aimed at Donald Trump. Elon Musk is asking Twitter followers if the company should reinstate the account of Donald Trump. 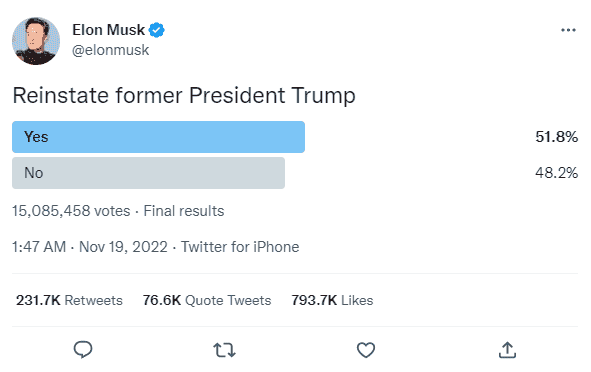 A good 15 million users took part in the survey as to whether the ban should be lifted. With a slim majority of 51.8 per cent, the community voted to revive Trump’s account. The profile was reactivated a few hours later. However, the number of followers was completely reset in the process. Nevertheless, the number of followers was returned back but Trump had lost about 2.4 million followers. Before the ban, Donald Trump had about 88.7 million followers. However, after reinstating the account, he now has 86.3 million followers.  Trump’s latest tweet is from January 2021, just before the inauguration of president Joe Biden. 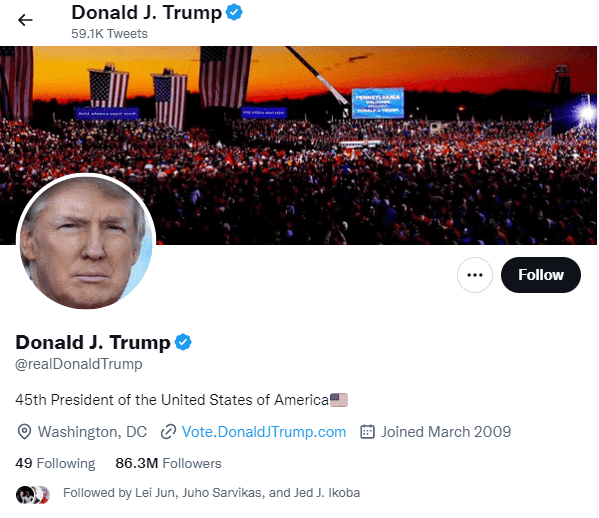 Donald Trump doesn’t want to go back at all

After the ban, however, Trump moved to his own platform Truth Social and spreads his views there. Although he has encouraged his followers to vote, he does not wish to return to Twitter. Of course, it cannot be ruled out that he will still use the short message service in the upcoming election campaign in order to benefit from the greater reach.

Just three weeks ago, Elon Musk emphasized that blocked accounts should not simply be restored. Instead, a team should be formed to deal with the relevant cases and then make a decision. With the survey, Musk violated the principle he proposed.

The release of Donald Trump’s account could change the situation of the social network. While many advertisers have already dropped out, other companies are now likely to consider whether they still want to place ads on the platform. In addition, more users are likely to migrate to Twitter alternatives such as Mastodon.

5 Healthiest Natural Drinks And Their Benefits –

5 Healthiest Natural Drinks And Their Benefits –