Oppo is gearing up to introduce the Oppo Reno 9 series in the next few hours. The new family consists of vanilla, Pro, and Pro+. The new family of devices plays with the premium mid-range segment, but the Oppo Reno 9 Pro+ is close to the current flagships. The device will pack the Snapdragon 8+ Gen 1 SoC. However, a new AnTuTu benchmark shows us an unexpected truth – it seems to be coming with an underclocked CPU. 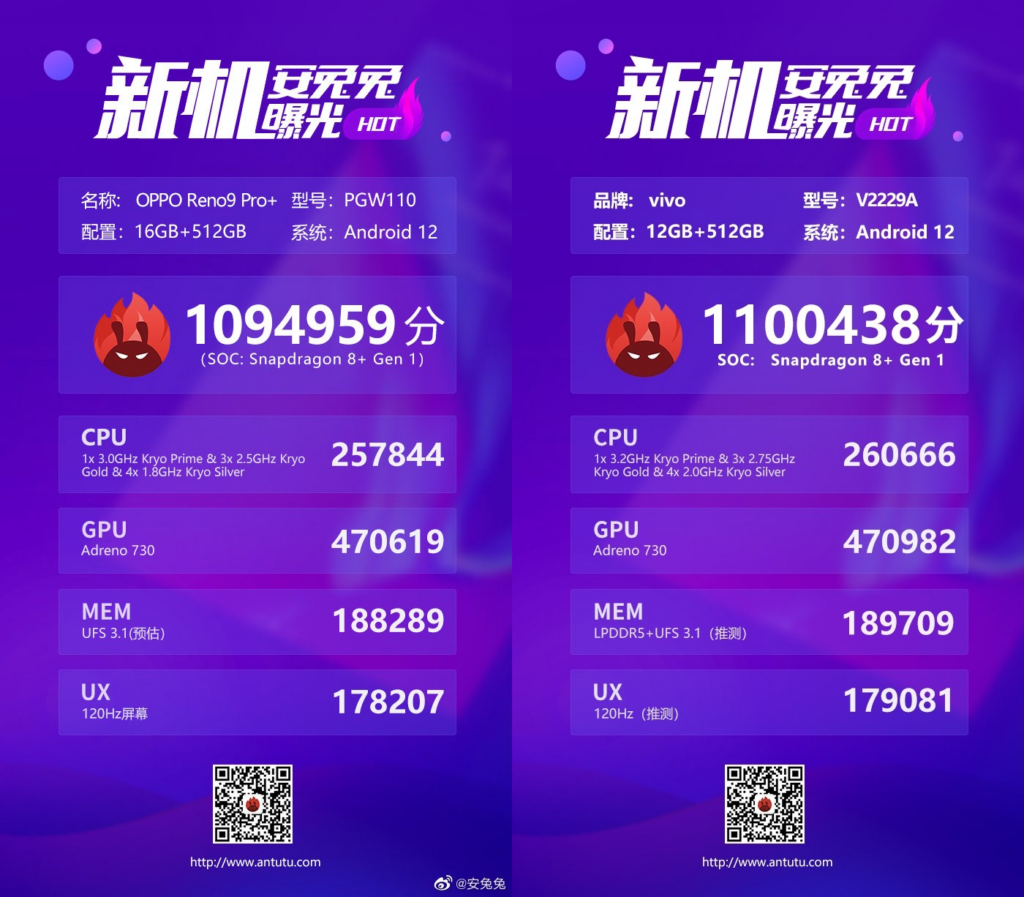 The Oppo Reno 9 Pro+ passed by AnTuTu and the score is close to devices in the category – 1,094,959. Apparently, the test was run by an underclocked version of the Snapdragon 8+ Gen 1. The other possibility is that the power save mode was enabled during the benchmark. During the test, the Prime Cortex-X2 core was running at 3.0 GHz, the A710 was at 2.5 GHz, and the A510 was running at 1.8 GHz. Usually, the standard SoC runs at 3.2 GHz, 2.8 GHz, and 2.0 GHz, respectively. In the same form, the typical SoC scores around 1.1 million. It’s hard to tell if the Adreno 730 GPU on the Oppo Reno 9 Pro+ was tweaked as well, but the score is on par with the typical version of the chip.

Qualcomm is pretty satisfied with the improvements made in the Snapdragon 8+ Gen 1 in comparison to the vanilla. However, it seems that Oppo found a way to underclock the chip without sacrificing performance. If that is the case, the Oppo Reno 9 Pro+ will deliver excellent flagship performance with very low power consumption. The unit in question had 16 GB of RAM and 512 GB of Internal Storage. As per the teasers, it has LPDDR5 and UFS 3.1 standards.

Curiously, the AnTuTu Benchmark shows the Oppo Reno 9 Pro+ running Android 12. Will it launch without Android 13 and ColorOS 13 without the box? That might be a problem since it will require an update to the latest Android version. Anyway, this is something that will need to wait to see.