Key details about the Oppo Reno 9 series of smartphones have surfaced online before the lineup’s upcoming China launch. Oppo will launch the Reno 9 series in its home country on November 24.

Notably, the Reno 9 series comprises the vanilla Reno 9, Reno 9 Pro, and Reno 9 Pro+ smartphones. The Reno 9 will reportedly ship with a whopping 16GB of RAM despite being a mid-range offering.

Past leaks have revealed several details about the upcoming Reno 9 series before it breaks cover tomorrow. Now, Oppo has officially confirmed some of these speculations.

Oppo has revealed the RAM, storage configuration, software version, and processor that will be powering up the Reno 9 series. However, the Chinese consumer electronics giant did not confirm which of the three phones will boast these specs.

The Reno 9 series is likely to get the Snapdragon 8+ Gen 1 processor. The highest-end Reno 9 Pro+ might use this processor.

The mid-range Reno 9 Pro will probably pack the same processor under the hood. A report by Gadgets Now suggests the Reno 9 will feature a Snapdragon 778 Plus chipset.

Also, the report claims the Pro models will come with a Dimensity 8100-Max chip. Also, Oppo has confirmed the devices will have 16GB LPDDR5 RAM and 512GB UFS3.1 storage.

Still, Oppo might launch more memory variants in the coming days. The Reno 9 series will run the latest Android 13 OS with a layer of ColorOS 13 skin on top. 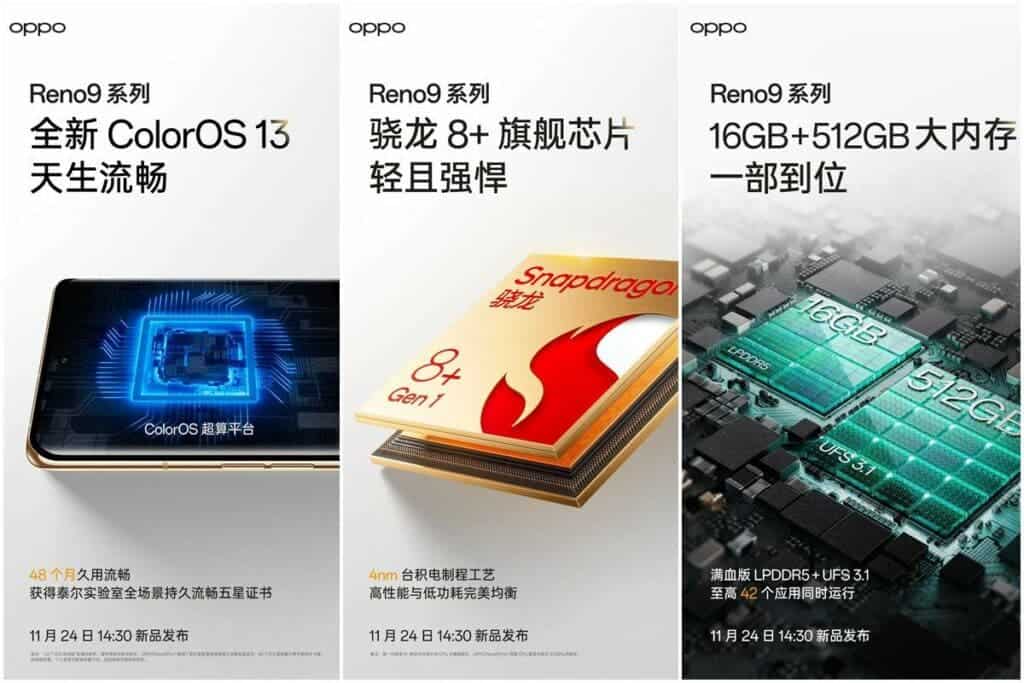 The Reno 9 Pro recently passed through the TENAA certification authority website with key details. The device sports a 6.7-inch AMOLED display with FHD+ resolution and a 120Hz refresh rate.

The handset will use a 4,390mAh battery with fast charging support to draw its juices. For optics, it will house a 50MP+8MP camera setup on the back. Upfront, it will have a 32MP selfie camera.

This selfie camera will sit inside a punch-hole cutout on the display. Lastly, the handset will be available in Slightly Drunk, Black, and Tomorrow Gold color options.