What’s the fate of the universe? New study reveals


Our universe is constantly changing. Many of these changes are not entirely positive. In some years, we may have to deal with serious issues due to the depleting universe. Unfortunately, many people do not have an interest in this topic. Topics in cosmology come with pretty difficult terms. However, in this post, we will make all explanations as simple as they can get. Simply put, this article is written in “layman’s terms” so that everyone can understand. Standard cosmology studies reveal that our universe has existed for about 13.7 billion years. During this long period of time, the universe has gradually expanded. It started as an infinitesimal singular mass (very small single mass) to the vast scale it occupies today. Today’s universe continues to expand, even accelerating. This forces physicists to introduce dark energy to explain this unusual acceleration. Little is known about the nature of dark energy. Simply put, dark energy is a theoretical form of energy that acts opposite to gravity. This is the energy responsible for most of the expansion and acceleration of the universe. However, as dark energy can make the universe expand, it can also make it shrink. A study by the National Academy of Sciences (PNAS) reveals that this energy will make the universe start shrinking before long.

Einstein created general relativity in 1915, making cosmology truly a science. Einstein’s field equations contain answers to questions about the origin and evolution of the universe. But it doesn’t give a static solution under the cosmological model. This means that Einstein’s equations do not describe a universe that’s always expanding or contracting. Einstein believed that the universe should be in an eternal static state. 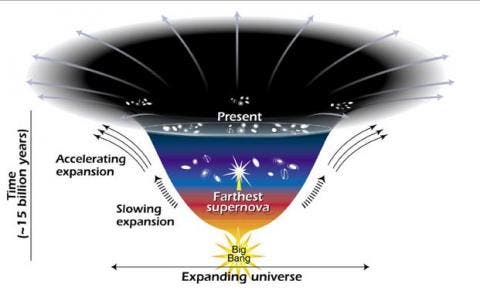 However, subsequent astronomical observations surprised everyone. In 1929, astronomer Edwin Hubble observed redshifts in extragalactic galaxies. This means that they were galaxies moving away from us. Einstein had to ditch his cosmological constant. Subsequently, Einstein made some adjustments to his equations. He acknowledged the fact that the universe would not be in an eternal static state.

The Universe continues to expand Incorporating this unknown energy into a cosmological model is actually equivalent to picking up the cosmological constant discarded by Einstein. This allows Einstein’s field equations to give a solution to accelerated expansion.

This unknown energy is now known as “dark energy”. Physicists estimate that dark energy should make up about 70 per cent of the entire contents of the world today. However, what exactly is this mysterious energy and how to describe it in physics? There is significant disagreement on how to describe it in academics. The cognition of dark energy is related to our prediction of the future fate of the universe. The universe is likely to stop expanding and start shrinking in the future. This can only happen if the energy density of dark energy is not constant but changes with time. This would take as little as 100 million years.

Fate of the universe in 100 million years The model predicts that the time of shrinking for the universe is not far off. However, the process will be very slow at first. It may take billions of years for the universe to reach half its size today. But on the other hand, all observations of expansion come from objects millions to billions of light-years away. This tells us about the world’s past, not its present or future. So, it’s also possible that the universe has begun to shrink. Nevertheless, we on Earth will not realize it until a long time later.

In all, we are certain that the world will not be here forever. Those who are religious (Christians) can even link its destruction or shrinking to the words of the Bible. However, we don’t yet have a way to know for sure whether dark energy is indeed a “substance,”. We can not also tell whether the expansion of the universe has begun to slow.